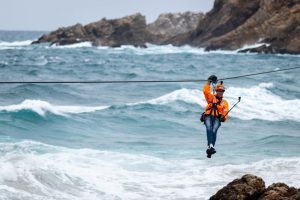 Mossel Bay will be getting a new zipline soon, which has been referred to as ‘1,1km of screaming fun’. The zipline was approved by the Mossel Bay Municipality in 2017 and is set to open later this month, although the official opening date is still to be announced.

Mossel Bay Zipline posted on its Facebook page that ‘Weather at this stage of installation has thrown us a small curve ball and we simply waiting for better weather to finalize the date.’

According to Mossel Bay Zipline, adventurers will be able to glide ‘over the ocean at speeds of up to 80km/h’ with views of the cliffs, ocean and even possibly some sea life on what it insists is the world’s longest over ocean zipline (1,100m).

The zipline will stretch from the cliffs below Point High School to the deck of the current (Shark Lab) aquarium at the Point, according to the Mossel Bay Advertiser.

A ride on the zipline will cost R450 per person. No children under 6 years old are allowed to ride, nor are pregnant women or people heavier than the weight restriction of 120kg.